In many languages, every object is an instance of an associated class, which provides code shared between all its instances. JavaScript, by contrast, has no built-in notion of classes. Instead, objects inherit from other objects. Every object is associated with some other object, known as its prototype. Working with prototypes can be different from classes, although many concepts from traditional object-oriented languages still carry over.

Understand the difference between prototype, getPrototypeOf and __proto__

Prototypes involve three separate but related accessors, all of which are named with some variation on the word prototype. This unfortunate overlap naturally leads to quite a bit of confusion. Let’s get straight to the point.

To understand each of these, consider a typical definition of a JavaScript datatype. The User constructor expects to be called with the new operator and takes a name and the hash of a password string and stores them on its created object.

The User function comes with a default prototype property, containing an object that starts out more or less empty. In this example, we add two methods to the User.prototype object: toString and checkPassword. When we create an instance of User with the new operator, the resultant object u gets the object stored at User.prototype automatically assigned as its prototype object. The image below shows a diagram of these objects

Notice the arrow linking the instance object u to the prototype object User.prototype. This link describes the inheritance relationship. Property lookups start by searching the object’s own properties; for example, u.name and u.passwordHash return the current values of immediate properties of u. Properties not found directly on u are looked up in u’s prototype. Accessing u.checkPassword, for example, retrieves a method stored in User.prototype.

This leads us to the next item in our list. Whereas the prototype property of a constructor function is used to set up the prototype relationship of new instances, the ES5 function Object.getPrototypeOf() can be used to retrieve the prototype of an existing object. So, for example, after we create the object u in the example above, we can test: 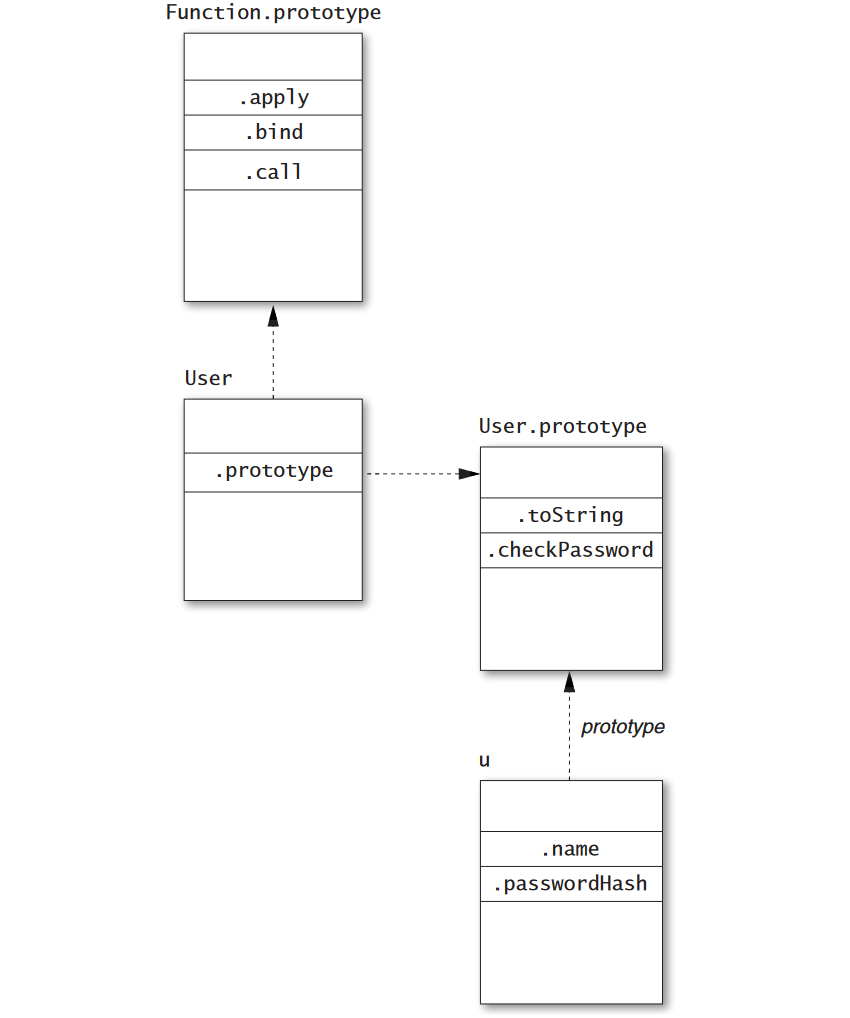 This illustrates the prototype relationships for the User constructor and instance.

Some environments produce a nonstandard mechanism for retrieving the prototype of an object via a special __proto__ property. This can be useful as a stopgap for environments that do not support ES5’s Object.getPrototypeOf. In such environments, we can similarly test:

A final note about prototype relationships: JavaScript programmers will often describe User as a class, even though it consists of little more than a function. Classes in JavaScript are essentially the combination of a constructor function (User) and a prototype object used to share methods between instances of the class (User.prototype). 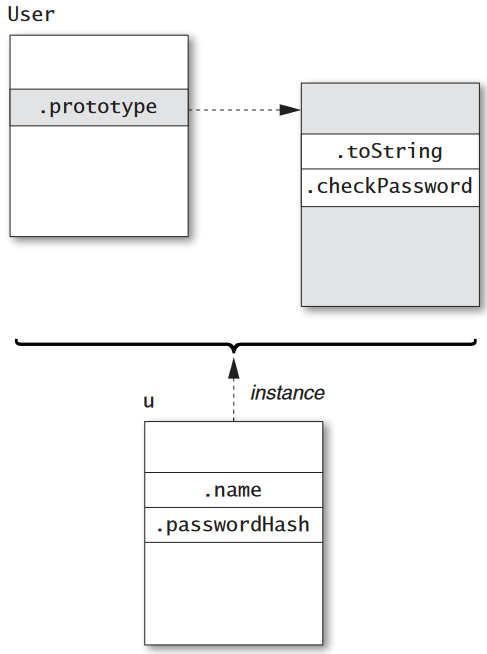 This is a conceptual view of the User “class”.

The image above provides a good way to think about the User class conceptually. The User function provides a public constructor for the class, and User.prototype is an internal implementation of the methods shared between instances. Ordinary uses of User and u have no need to access the prototype object directly.

ES5 introduced Object.getPrototypeOf as the standard API for retrieving an object’s prototype, but only after a number of JavaScript engines had long provided the special __proto__ property for the same purpose. Not all JavaScript environments support this extension, however, and those that do are not entirely compatible. Environments differ, for example, on the treatment of objects with a null prototype. In some environments, proto is inherited from Object.prototype, so an object with a null prototype has no special proto property:

Wherever Object.getPrototypeOf is available, it is the more standard and portable approach to extracting prototypes. Moreover, the __proto__ property leads to a number of bugs due to its pollution of all objects. JavaScript engines that currently support the extension may choose in the future to allow programs to disable it in order to avoid these bugs. Preferring Object.getPrototypeOf ensures that code will continue to work even if __proto__ is disabled.

For JavaScript environments that do not provide the ES5 API, it is easy to implement in terms of __proto__:

This implementation is safe to include in ES5 environments, because it avoids installing the function if Object.getPrototypeOf already exists.

The special proto property provides an additional power that Object.getPrototypeOf does not: the ability to modify an object’s prototype link. While this power may seem innocuous (after all, it’s just another property, right?), it actually has serious implications and should be avoided. The most obvious reason to avoid modifying __proto__ is portability: Since not all platforms support the ability to change an object’s prototype you simply can’t write portable code that does it.

Another reason to avoid modifying __proto__ is performance. All modern JavaScript engines heavily optimize the act of getting and setting object properties, since these are some of the most common operations that JavaScript programs perform. These optimizations are built on the engine’s knowledge of the structure of an object. When you change the object’s internal structure, say, by adding or removing properties to the object or an object in its prototype chain, some of these optimizations are invalidated. Modifying __proto__ actually changes the inheritance structure itself, which is the most destructive change possible. This can invalidate many more optimizations than modifications to ordinary properties.

But the biggest reason to avoid modifying __proto__ is for maintaining predictable behavior. An object’s prototype chain defines its behavior by determining its set of properties and property values. Modifying an object’s prototype link is like giving it a brain transplant: It swaps the object’s entire inheritance hierarchy. It may be possible to imagine exceptional situations where such an operation could be helpful, but as a matter of basic sanity, an inheritance hierarchy should remain stable.

For creating new objects with a custom prototype link, you can use ES5’s Object.create. For environments that do not implement ES5, Item 33 provides a portable implementation of Object.create that does not rely on __proto__.

🎉🎉🎉 Thank you for reading the second part this article! 🎉🎉🎉

Don't forget to checkout the third part of this serie! 🥳 Make your Constructors new-Agnostic.

And if you want more in depth knowledge about your favorite programming languages checkout my personal blog to become an on demand developer 😉, and you can find me on twitter as well😃.

I genuinely care about people, and love helping fellow engineers work on their craft.

Find an issue on this web app? Become a contributor!🥳